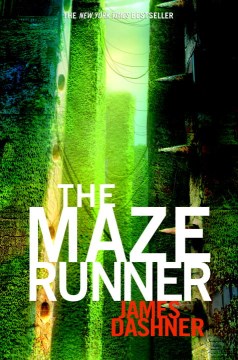 As with many recent stories being spread over multiple volumes, this often-exciting but ultimately frustrating opener reads more like an extended prologue than a fully realized novel. Thomas, his memory wiped out, is thrust into the center of an enormous maze, where other teens have constructed a survivalist society. No one knows why they're there, or where they came from, but each day they send out runners into the constantly shifting, monster-infested labyrinth to search for a way out. As memories start to trickle back in and circumstances grow increasingly dire, Thomas suspects he knows more about the maze than he should. The withholding and then revelation of crucial information tend toward contrivance and convenience, but the tantalizing hints of a ravaged world outside make for gripping reading. Although this opening volume will appeal to the same audience as hot dystopian thrillers like The Hunger Games (2008), it doesn't promise the same level of devotion. With much of the more intriguing head-game aspects left unexplored, though, the potential for a rousing continuation of the story certainly exists. Copyright 2009 Booklist Reviews.

Though Dashner wrapped up his best-selling Maze Runner trilogy with 2011's The Death Cure, he returns to the well with this prequel, telling the backstory of how the world's population came to be infected with the psychotic lunacy disease that would lead scientists to put teens through a series of sadistic tests in the name of finding a cure. We meet Mark and Trina soon after ravenous sun flares wipe out a good swath of humanity, living tooth and nail in a small settlement until a gang of hazmat-suited folks drop from the sky and shoot everyone up with virus-laden darts. The quest to find answers and save their band of friends takes them straight into a bleak heart of darkness. The story's burdened by thin characters, plot contrivances, and generally tortured logic, but the series' many readers aren't in it for the craft. The draw is the gobs of gruesome violence and raving lunacy in the back-to-back, extended action sequences. And there's plenty such fare here, even if it all feels like the stakes are lowered a bit by knowing the inevitable outcome. Copyright 2012 Booklist Reviews.

Thomas wakes up with no memory, surrounded by boys around his own age. He has been placed in a maze with obstacles and monsters to fight, but more important is figuring out how he got there--and what happened to the adults. The story is fast-paced and gripping, with unexpected twists (though readers familiar with sci-fi of this type may not be surprised). Copyright 2010 Horn Book Guide Reviews.

Set about a year after the sun flares that destroyed the world, this prequel to The Maze Runner trilogy explains the origins of the deadly Flare virus and the discovery of the first Immune. It doesn't stand alone, but fans of the series will appreciate this fast-paced addition to the canon, as will die-hard post-apocalyptic readers who can overlook the plot's tedium.

This prequel to Dashner's dystopian Maze Runner trilogy, set 13 years before those books,focuses on a new character—Mark—who lives through the "sun flares" that decimate Earth. He creates a new family with other survivors, including Alec, a tough old soldier, and Trina, his love interest. But then strangers arrive on an airship and infect villagers with a mysterious virus, which quickly spreads and mutates. Maze Runner fans may be surprised by the new protagonist, but they will be swept up in the breathless, cinematic action. Whether Mark is flashing back to his escape from the sun flares, stealing an airship with Alec, or battling hordes of virus-infected maniacs, Dashner's adventure is filled with near-constant melees and peril (some readers might want to trade some fight scenes for more narrative and character development). Even so, Dashner has crafted a clever prequel that will appeal to fans anxious to see where The Maze Runner came from, while enticing those unfamiliar with the later books. Ages 12–up. Agent: Michael Bourret, Dystel & Goderich Literary Management. (Aug.)

Dashner (the 13th Reality series) offers up a dark and gripping tale of survival set in a world where teenagers fight for their lives on a daily basis. It starts when Thomas, a teenage amnesiac, wakes up in the Glade, a fragile oasis in the middle of an enormous maze. Here, a group of teenage boys eke out a hazardous existence, exploring the Maze by day and retreating to the Glade at night. No one knows how they got there; no one has ever found a way out ("Old life's over, new life's begun. Learn the rules quick," the group's leader tells Thomas). Bizarre technological monsters called Grievers patrol the Maze's corridors, almost certain death for any who encounter them. Thomas struggles to regain his memories, but the arrival of a young woman with an ominous message changes the rules of the game. With a fast-paced narrative steadily answering the myriad questions that arise and an ever-increasing air of tension, Dashner's suspenseful adventure will keep readers guessing until the very end, which paves the way for the inevitable continuation. Ages 12–up. (Oct.)

The city of EmberDuPrau, Jeanne