Last call : the rise and fall of Prohibition / Daniel Okrent. 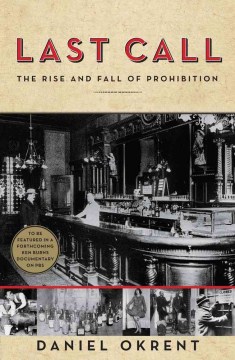 Okrent provides a remarkable breakdown of Prohibition, that uniquely American attempt to banish the sale and consumption of alcohol. In 1919, a constitutional amendment prohibiting the manufacture, sale, or transportation of intoxicating liquors within the U.S. was ratified and scheduled to go into effect the following year. Okrent traces the roots of the temperance movement, the suffrage movement, and the anti-immigrant sentiment that added sustained fuel to the cause. He also unravels the complicated politics of the era, providing insight into why the Eighteenth Amendment was pushed through and how it was eventually repealed. After Prohibition went into effect, in 1920, the course of American life and culture was profoundly altered in both large and small ways. Everyone knows about the rise of the gangster era, but what is less well documented are the reactions and the responses of ordinary American citizens. Okrent asks and answers some important questions in this fascinating exploration of a failed social experiment. Copyright 2010 Booklist Reviews.

While the story of Prohibition (1919–33) is not suspenseful, since we know how this social experiment turned out, Okrent (former public editor, New York Times) helpfully fills in details, explanations, and lessons to be learned while supplementing the familiar story of how legislated temperance did not succeed. He mines archival and published sources and adds memories acquired through interviews and reference to previously unavailable private papers. Okrent emphasizes that the 18th Amendment was a long time coming, passed by the efforts of progressives, populists, nativists, and other morally motivated reformers. Temporarily ending the fifth-largest industry in America, Prohibition transformed the alcoholic beverage business as well as American culture generally. Okrent admits that, although Prohibition promoted criminality and hypocrisy, it did cut the rate of alcohol consumption. He book-ends his work with historical explications of Prohibition's enactment and its eventual demise owing to lack of both sufficient political will and enforcement funds. VERDICT While there are other Prohibition narratives, e.g., Michael Lerner's ably done Dry Manhattan, acknowledged by Okrent, this sprightly written and thoroughly annotated work is recommended for both the general reader, to whom it is directed, and the scholar.—Frederick J. Augustyn Jr., Library of Congress

Daniel Okrent has proven to be one of our most interesting and eclectic writers of nonfiction over the past 25 years, producing books about the history of Rockefeller Center and New England, baseball, and his experience as the first public editor for the New York Times. Now he has taken on a more formidable subject: the origins, implementation, and failure of that great American delusion known as Prohibition. The result may not be as scintillating as the perfect gin gimlet, but it comes mighty close, an assiduously researched, well-written, and continually eye-opening work on what has actually been a neglected subject.

There has been, of course, quite a lot of writing that has touched on the 14 years, 1919–1933, when the United States tried to legislate drinking out of existence, but the great bulk of it has been as background to one mobster tale or another. Okrent covers the gangland explosion that Prohibition triggered—and rightly deromanticizes it—but he has a wider agenda that addresses the entire effect enforced temperance had on our social, political, and legal conventions. Above all, Okrent explores the politics of Prohibition; how the 18th Amendment, banning the manufacture, sale, or transportation of intoxicating beverages, was pushed through after one of the most sustained and brilliant pressure-group campaigns in our history; how the fight over booze served as a surrogate for many of the deeper social and ethnic antagonisms dividing the country, and how it all collapsed, almost overnight, essentially nullified by the people.

Okrent occasionally stumbles in this story, bogging down here and there in some of the backroom intricacies of the politics, and misconstruing an address by Warren Harding on race as "one of the boldest speeches ever delivered by an American president" (it was more nearly the opposite). But overall he provides a fascinating look at a fantastically complex battle that was fought out over decades—no easy feat. Among other delights, Okrent passes along any number of amusing tidbits about how Americans coped without alcohol, such as sending away for the Vino Sano Grape Brick, a block of dehydrated grape juice, complete with "stems, skins, and pulp" and instructions warning buyers "not to add yeast or sugar, or leave it in a dark place, or let it sit too long," lest it become wine. He unearths many sadly forgotten characters from the war over drink—and readers will be surprised to learn how that fight cut across today's ideological lines. Progressives and suffragists made common cause with the Ku Klux Klan—which in turn supported a woman's right to vote—to pass Prohibition. Champions of the people, such as the liberal Democrat Al Smith, fought side-by-side with conservative plutocrats like Pierre du Pont for its repeal.

In the end, as Okrent makes clear, Prohibition did make a dent in American drinking—at the cost of hundreds of deaths and thousands of injuries from bad bootleg alcohol; the making of organized crime in this country; and a corrosive soaking in hypocrisy. A valuable lesson, for anyone willing to hear it.

Kevin Baker is the coauthor, most recently, of Luna Park, a graphic novel published last month by DC Comics.

Eliot Ness: the rise and fall of an American HeroPerry, Douglas, 1968-

The war on alcohol: prohibition and the rise of the American stateMcGirr, Lisa, 1962-

1920: the year that made the decade roarBurns, Eric

Dancing in the dark: a cultural history of the Great DepressionDickstein, Morris

Once in a great city: a Detroit storyMaraniss, David

The forgotten man: a new history of the Great Depression : graphic editionShlaes, Amity

To drink or not to drink: bone fide Prohibition-era arguments for and against lawless liquor