Steve Jobs : the man who thought different : a biography / by Karen Blumenthal. 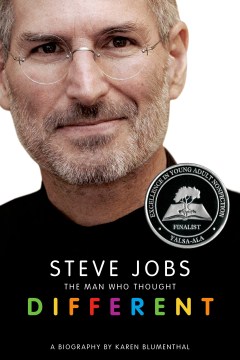 *Starred Review* Walter Isaacson's best-selling biography, bolstered by 40 interviews with its subject, is the current gold standard for books about Steve Jobs, but Blumenthal's in-depth look at the innovator's life makes a close runner-up and a winner for younger audiences. Blumenthal, a former business reporter, uses a speech Jobs made to a graduating class at Stanford as an inviting hook to draw readers in. He told his audience stories about the most important incidents in his life, beginning with his adoption, and how the dots of his life connected in mysterious ways. His adoptive father was skilled with his hands and a perfectionist, a trait Jobs carried on, sometimes to extremes. The worst moments in Jobs' life, like being fired from Apple, the company he built, led him to bigger and better moments, and an eventual return to Apple, where he would give the world iPods, iPhones, and iPads. His final story was about his cancer, and his message was to "follow your heart and intuition." Through original interviews, a smart use of source material, and a wonderfully easy-going style, Blumenthal gives a full portrait of Jobs, with his many well-documented flaws (which here might be a tad underplayed), his original and far-sighted aesthetic, and his willingness to push himself and others to achieve the best—as he perceived it. One advantage this has over Isaacson's book is the well-placed sidebars that explain everything from how computer memory works to Jobs' distinctive wardrobe. This is a smart book about a smart subject by a smart writer. To be illustrated with photographs. Glossaries and sources are appended. Copyright 2012 Booklist Reviews.

Blumenthal's journalistic style suits the subject, and she uses the words of Jobs and his closest associates to paint an engaging and intimate portrait. Few biographies for young adults feel as relevant and current as this one does. Black-and-white photographs are interspersed throughout the narrative, and some interesting tangents are unobtrusively placed in sidebars. Bib., glos., ind.

Framing her work around the themes of a lauded commencement speech that "technology rock star" Jobs delivered to Stanford University's class of 2005, Blumenthal crafts an insightful, balanced portrait of the enigmatic man whose life was cut short by illness in 2011. The book chronicles Jobs's boyhood passions for technology, simplicity, and design that led to his rocky tenures with the technology company he helped create, was fired from, and returned to and led to the heights of its success. Readers receive a primer in technological advances, including the mathematics of animation, as well as Jobs's vision for product design and marketing innovation. Blumenthal relates accounts of Jobs's eccentric hygiene and eating habits, his infamous tantrums and tirades in the workplace, and his harsh treatment of colleagues, loved ones, and friends. However, his charisma often won the day, and commentary from Jobs and his wife, given near the end of his life, help soften the picture. Numerous b&w photographs and sidebars appear, and an author's note, technology time line, glossary, index, and bibliography give this volume extra polish. Ages 12–up. Agent: Ken Wright, Writers House. (Feb.)

Elon Musk & the quest for a fantastic futureVance, Ashlee

Larry Page and Sergey Brin: information at your fingertipsHenderson, Harry, 1951-